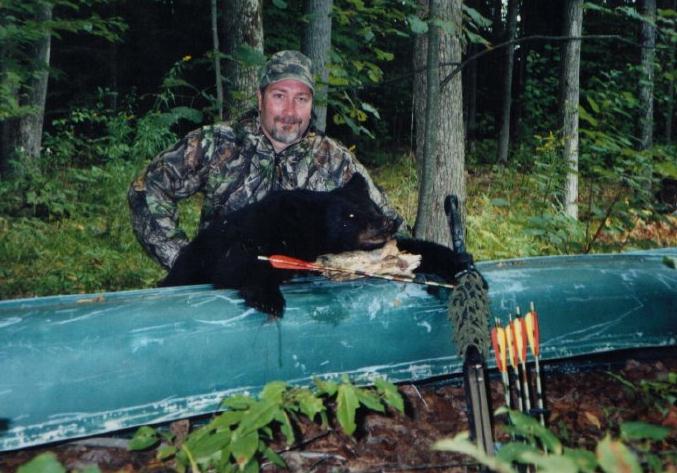 Taken with an Excalibur Exocet, on the second day of opening season, using 100gr.Wasp SST Hammer 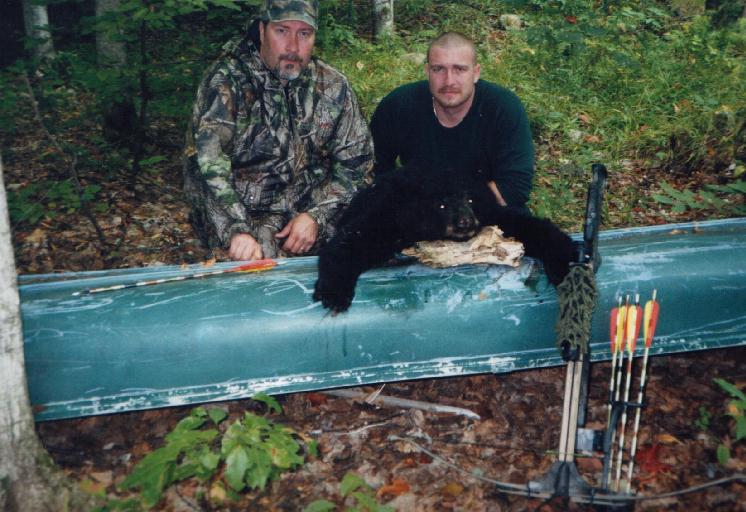 Myself (Left) and my hunting partner Jeff Diotte with my bear. 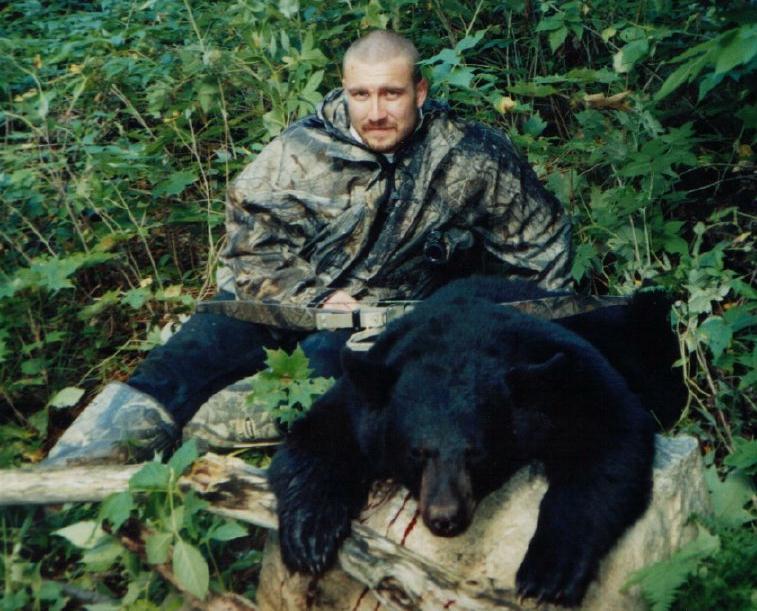 Jeff Diotte with his Bear "Jelly Roll, The Circus Bear"

We nick named the Bear "Jelly Roll" because it was so short and fat. Any Circus Missing a Bear? 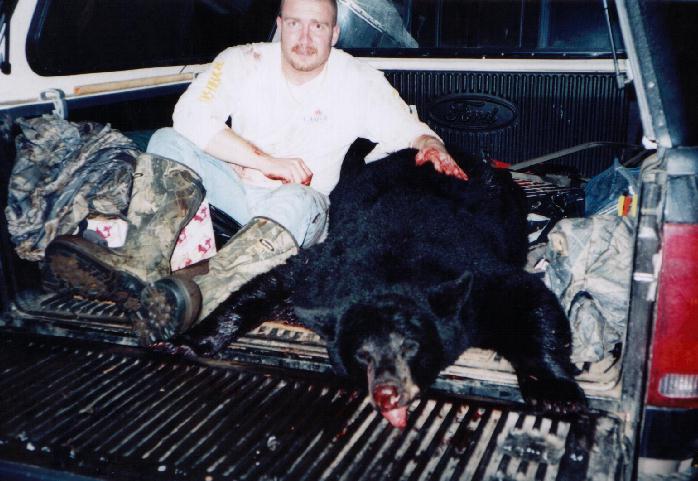 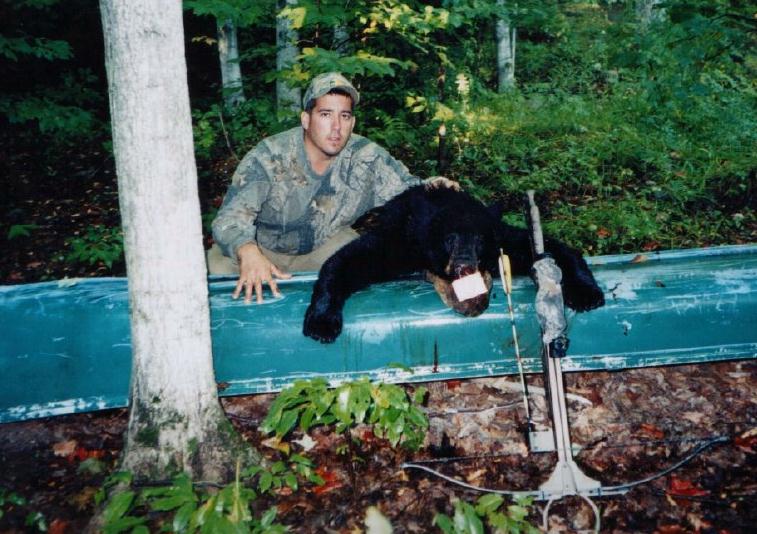 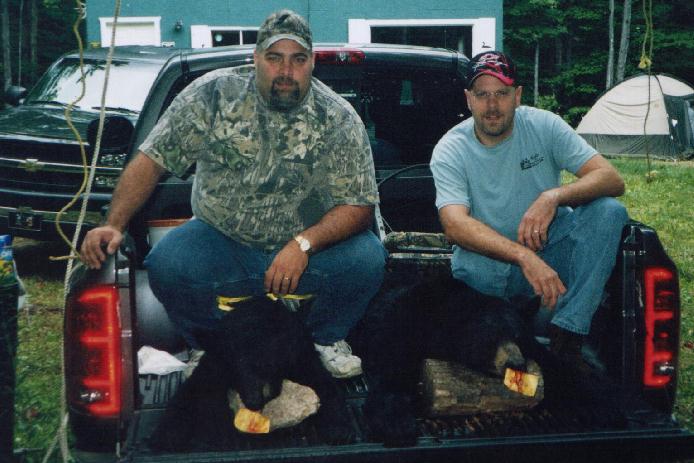 Eddie and Mike from Pennsylvania

Mikes Bear taken after a total of 4 minutes in the stand!

Great Hunting with you guys! Sorry about our Crap all over the Cabin!! 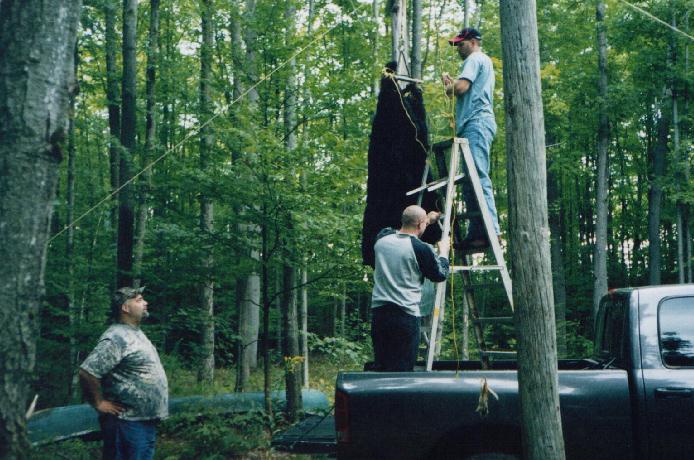 Eddie, Jeff and Mike getting the bears ready to take to Base

A Special Thanks Goes to Jeff Diotte for Educating me on the Absolute Thrill of Black Bear Hunting.

Eric Elson from The Archers Nook for the Best bolts I've used.

Excalibur Crossbows for making the Best Damn Crossbow on the market!

This was the first Black Bear hunt I've been on, and I must say it has to be the most addicting form of hunting there is. I've already booked my spot for next year, and I'm looking forward to it already!

Here's The Entire Story as posted on Excalibur's Forum...

Now that I've recovered a little from the trip,, I've got a few pictures up from the hunt.

After we arrived at camp, we started checking our baits. Keeping in touch with the outfitter since July, we knew the baits were getting nailed constantly. After checking all of the baits, I picked the one I wanted...About 1km from the Hydro cut, and another 1km from our cabin.. A real nice spot, with a small ridge at my back and a Beaver swamp about 100 yards to my front.

I got into my stand the first afternoon around 2pm.. Pretty interesting being in that stand for the first time in those woods...Seen a variety of animals.. Chipmunks, Pine Martin, Red Squirrels, and a Huge Turkey Vulture which landed about 2 feet directly behind me. It hadn't seen me, and when I turned to look at it, it flew off, scaring both of us.. LOL

I came down from my stand, just before dark, slightly disappointed, but very eager, and confident that the spot was going to pay off.. Only a matter of time....

My partner Jeff Diotte, that night passed on several good sized bears, I would have been very happy with any of them.

The next morning we freshened the bait, and sure enough it was hammered. Checking the other baits, we found they were also hit hard. The syrup and sweet grain we were using was completely gone.

On the second afternoon hunt, I found that the bait was hit again sometime during the day. I quickly straightened things out, dumped about 1ltr. of syrup and headed for the stand.

The first night I had a few problems with my Camel Bak, so I made some adjustments, and hung it just above my head, and positioned the hose over my shoulder. This gave me easy access to the hose with very little movement. About 2 hours into my watch I had a pretty nasty coughing spell, that I was sure would send everything in the area into the next county. The coughing calmed down and the woods starting filling with nature sounds again...

I had a visitor in the tree behind me once again, this time a large Red Tailed Hawk, who I assume was eyeing all of the chipmunks in and around the bait. Seems like I wasn't the only one waiting for some action.

The sounds of the woods can be a little nerve racking, chattering chipmunks, woodpeckers, and a few other things which I wasn't sure of.

Behind me a snap got my attention, and I almost had to turn completely around to see where it came from. All I seen was a large black ball, I didn't know if the bear seen me, and didn't know whether it was even looking in my direction. I assumed it was.

I slowly turned back, and hoped I wasn't spotted. At this point my heart was racing, as I carefully listened to the sounds that were getting closer. I could actually hear the bear breathing, vacuuming the air, searching for a scent of danger.

Then the entire situation starting  getting interesting. I felt a bump against the ladder that my right arm was resting on, the tree shook a little and my pull rope was moving. I spread my knees and looked down to see the bear scratching its head on my tree, ladder and playing with my pull rope.

I flipped the safety off carefully, closed my legs and waited for the animal to appear from under the tree. Once again I could hear the bear breathing, the tree started to shake a little more, the breathing getting very louder, my heart nearing pounding out of my chest. I wasn't sure where the bear was, and even looked over my shoulder behind me, looking for a paw, hoping I wasn't going to come face to face with the bear. Spreading my legs again, I looked down and sure enough there she was, smelling the bottom of my boot, her nose pressed to the grill of my stand.

At this point I just wanted the bear out of the tree. I wasn't afraid that it wanted a piece of me, it was just checking me out, and trying to figure out what I was. Completely encased in Scent Blocker, and using all proper scent control techniques, I imagine that I was fairly scent free.

The bear slid calmly down the tree and continued like nothing had happened towards the bait. Once it cleared my stand I followed it in with the scope and waited for a proper shot. It didn't take long for that shot. When the bear lifted its head to smell the top of the barrel it gave me a perfect quartering away shot. I took my mark and let the bolt fly.

The Wasp 100gr.SST Hammer hit her high just behind the front leg, taking out both lungs. The bear ran less tan 15 yards and colapsed with 4-5 death moans.

Everything went flawlessly, almost text book. I can't tell you how much absolute confidence I have in that Excalibur Exocet. Literally "Surgical Precision”.

Also I do have to say that I don't think that any of this would have been possible if I didn't use the proper scent control techniques and products almost religiously. Even though the bear was literally centimeters from me, I believe she knew what I was, however my scent being contained within the Scent Blocker, my rubber boots and cover scents on my hat, gloves and boots, the intensity of my human odor wasn't enough to alarm her.

Anyone doubting the effectiveness of a Scent Blocker suit, should have been in that tree with me. All doubts would be gone.

Thanks to Excalibur Crossbows for making such a terrific, Accurate product. I Will shoot nothing else!

Back To On/Scene Tactical Main Page